Oh, DisneyQuest, I shall remember you fondly.

For those of you who are not in Florida, or visited Chicago between 1999 and 2001, let me bring you up to speed. DisneyQuest is a large arcade constructed by Disney, combining their own franchises with various arcade machines. A multi-floor establishment, entertainment varies from classic arcade racing to old school arcade games like Donkey Kong to pinball machines to virtual reality and more. The project was going to feature several locations, from Orlando to Chicago, Philadelphia to Anaheim. However, poor attendance caused the project to cancel any future expansions, and caused the Chicago location to shut down, leaving only the one in Orlando to be around.

However, after changes were done in Downtown Disney – renamed to Disney Springs – it was announced that the last DisneyQuest would be shut down to make way for the NBA Experience. After some back and forth about the end, the time has been set for July 3rd, 2017 to be the shutdown. Fare thee well, classic arcade machines. Though I may be able to find you at other arcades, never will I find such a collection with free play to allow me to tackle the challenges of yesteryear. Fare thee well, Pirates of the Caribbean: Battle for Buccaneer Gold. Your virtual reality plundering was glorious, and I did manage to become a Master of the Caribbean, the highest potential ranking. I will miss blowing up forts and skeleton pirates. Fare thee well, Animation Academy. My various practices of drawing Disney characters (I can do Mickey Mouse rather well now) will reside in my repertoire of artistic skills, and keep these fond memories. Fare thee well, Ride the Comix. Though you were removed far before now, I will not forget the fun of taking on virtual reality comic book villains with a laser sword… or waiting in line, watching these helmeted players wave remotes around, having fun while looking quite silly. Fare thee well, Let’s Go Jungle arcade jeeps. Your cooperative shooting style led to many fun playthroughs, followed by boasting of how in sync we are.

Fare thee well, Jungle Cruise adventure. You would make my arms tired as I paddled like crazy to try to avoid the carnivorous dinosaur areas, only to end up tired and pushed down those paths anyway. Fare thee well, Aladdin’s Magic Carpet Ride. Traversing through Agrabah and the Cave of Wonders as a color coded monkey on a magic carpet was always a fun excursion, even if we were seeking the Genie to avoid Jafar taking over everything. 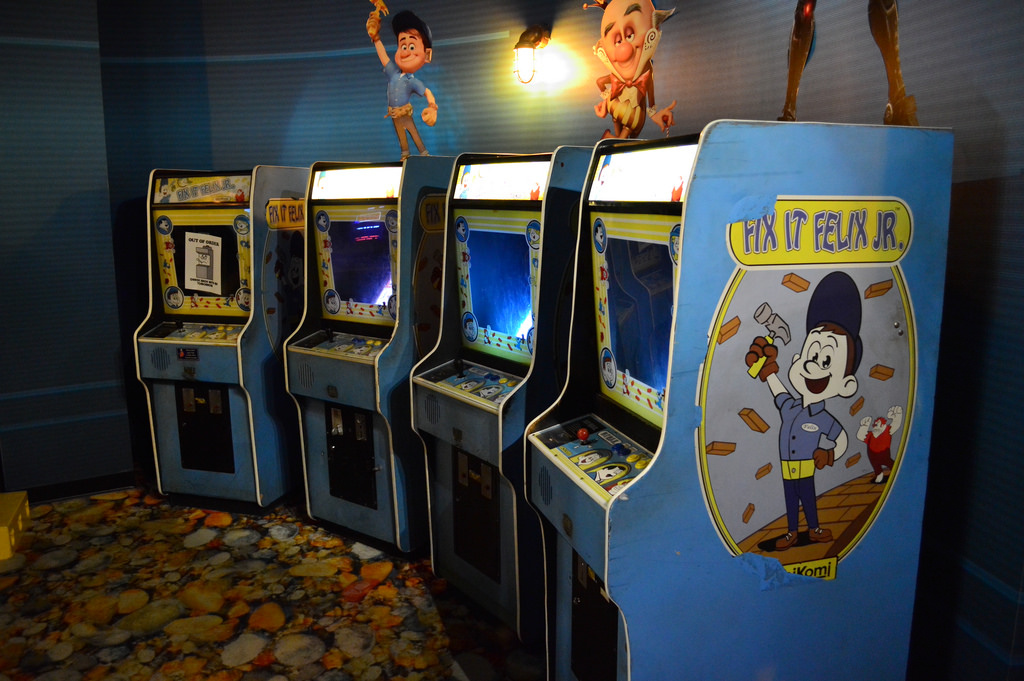 Fare thee well, Fix It Felix Jr. machines. Being the only place to play these, I believe, I wonder what they will do with you. I wonder if I could get my hands on one… Fare thee well, to everything else. Too many attractions and machines to list, but I will remember them all fondly, and still plan to make another trip before it closes up shop.

For anyone who is able to make it in the area, I would recommend giving it a visit.